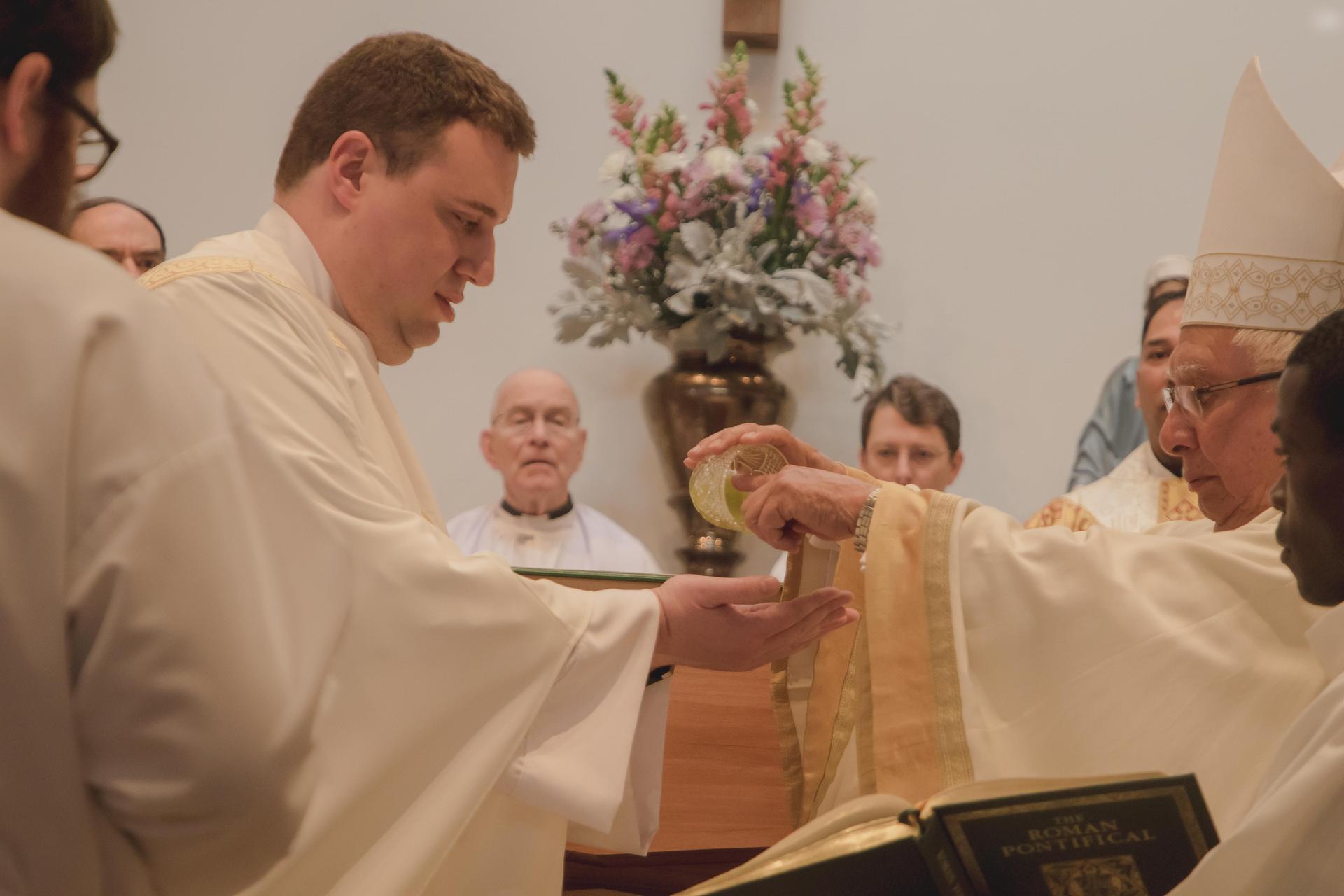 It was a homecoming for Steven Huber ’04 as the Congregation of St. Basil celebrated his ordination to the priesthood February 9, 2019, at Our Lady of the Annunciation Catholic Church in Albuquerque.

“It was so special to have it there,” said Huber, now Father Steven Huber, CSB. “There are so many people in the parish who have known me throughout my life. For many of them, it was a first time to see an Ordination Mass. It was neat to share that with the parish community.”

Huber was baptised and confirmed at Annunciation. He made his first communion and went to elementary and middle school there. He was an altar server, a communion minister and a lector there. And now, at Annunciation, he has celebrated his ordination and and his first Mass.

Most Reverend Ricardo Ramirez, CSB, Bishop of Las Cruces, presided at the Mass of Ordination. He was joined by many Basilians and local priests, including Fr. Graham Golden, a priest of the Norbertine Community ordained in 2015 and a fellow member of the SPX Class of 2004.

“When I was a student at Pius, the thought of the priesthood was in the back of my mind, but I was pretty well convinced I was going to become a high school choir director,” Huber said by phone from his new parish in Windsor, Ontario, where he serves as associate pastor. SPX Choir Director Lina Ramos and Evelyn Olguin, director of the liturgical choir, helped him grow his love of music. Theology teachers Scott Howard and Al Mills were a positive presence. And although he never had a class with Phil Zuber, a locker outside his classroom and rhyming last names created a lasting bond.

“I saw faith in action at St. Pius,” Huber said of the many teachers who influenced him.

Huber went on to New Mexico State University to earn a degree in music education in 2009. While at NMSU, he attended the campus Newman Center, where he connected with the Congregation of St. Basil.

Huber had a previous limited background with the Basilians. St. Pius X had been a Basilian school, but Huber’s first year there was the school’s first with a lay administration. His father also had gone to a Basilian school in Indiana. At NMSU was his first chance to really get to know members of the order, including Bishop Ramirez. Working on campus ministry projects, Huber also met Chris Valka, a Basilian seminarian spending his diaconate year at the NMSU Newman Center.

After graduating from NMSU, Huber taught choir at Eisenhower Middle School in Albuquerque for two years. “At the end of the first year, I felt like something was missing and the question of the priesthood kept nagging me,” Huber said.

Around that time, now-Fr. Chris Valka, sent him an email asking if he had ever thought of becoming a priest. “That made me start discerning more intensely whether I was being called to the priesthood,” Huber said.

He also began talking to Msgr. Bennett J. Voorhies of Annunciation Parish, who connected him to the Archdiocese of Santa Fe vocations discernment retreat. He attended and began to explore the question of diocesan priesthood versus religious life. After spending a weekend with a priest in Northern New Mexico who was driving up to 30 miles between churches for Masses and caring for a large area of the state by himself, Huber realized that sharing a common life with a religious community appealed more to him.

He knew the Basilians from his experience at NMSU and believed his degree in education fit well with their work of Christian education and evangelization. While the Basilians teach and administer high schools and universities, they also serve as missionaries, parish priests and pastors, hospital chaplains, licensed counselors and therapists and retreat directors.

“As I started to visit and know them more, I began to feel their sense of brotherhood,” Huber said. “It felt natural and like I belonged there.”

At the end of Huber’s second year teaching choir, his decision was made. He resigned and started his formation with the Basilians in June 2011. He spent one year teaching at Detroit Catholic Central High School. Afterwards, he moved to Houston, Texas, to complete his Novitiate and Seminary Studies at St. Mary’s Seminary. He served at Assumption Parish in Windsor as a deacon in the final months before his ordination and then was assigned there.

Windsor sits on the U.S.-Canada border and the view out Huber’s window shows the bridge to cross into Detroit. “There’s an advantage to being right the border, if there’s something I’m missing that I can only get in the States, I can be in Detroit in five minutes” he said. Huber’s Basilian community there includes the pastor and another priest in residence at the parish.

“The Basilians’ primary ministry is teaching, but I’m grateful for this form of ministry,” Huber says. “The sacrificial life is so important to who a priest is. This time I’m spending is good foundational work, to be a minister in a sacramental role. You wouldn’t necessarily get that working full-time teaching. I work with families in all stages of life -- planning funerals, couples getting married, people experiencing difficulties.”

Huber offers this advice to people discerning where God is calling them: “Don’t be afraid to ask the questions. Reach out to someone and say I don’t know if God is calling me. There are many steps along the way to the end result. Just saying you’re thinking about it is not automatically locking you into it.

“I sometimes wondered if God knew I was going to be a priest, why did he let me spend time going to college and then teaching. I know now he used those experience to shape me into the person I am today.”