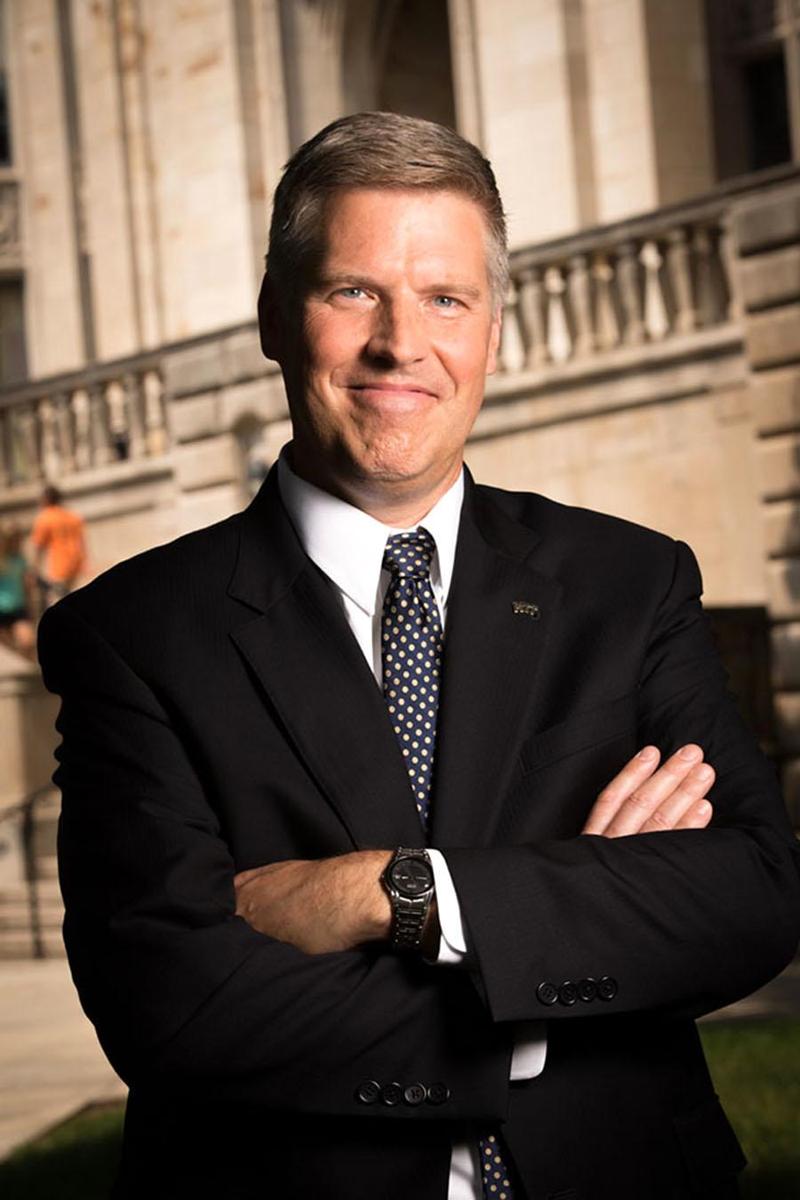 Patrick Gallagher ’81, chancellor and chief executive officer of the University of Pittsburgh, says he’s racing to keep up.

“There’s so much happening that’s driven by other people,” he says. “I’m racing to keep up with a remarkable faculty and student body, and it fills my day with great people with lots of passion.”

Selected in 2014 to steer one of the nation’s top-rated public universities, Gallagher says his job is to build on the momentum of the past 20 years’ effort, which saw the university’s work in research and academics impact the transition of the city of Pittsburgh from a steel town to a hub for technology, education, healthcare and financial services.

“The university is playing an unique role in the country and the region,” Gallagher says. “We’re poised to educate students who have the opportunity to go out and do great things with their lives. And we want to translate our research strengths into applications that make a difference.”

The drive to contribute in a way that makes the world a better place got its start when Gallagher joined Amigos de las Americas as a junior at St. Pius X High School. Through four years with the program and summers providing health care and sanitation programs in Mexico, Honduras and Ecuador, his leadership and management skills grew.

“Amigos was a big focal point for me,” he says. “The first year I didn’t know what I was getting into. It was intense and interesting training, but getting in-country was an eye-opener. It seduced me and I kept getting deeper into the program.”

By his fourth summer he had become project director for all of Ecuador managing about 70 volunteers. Gallagher calls it the beginning of his management career.

Fr. Falbo’s chemistry class and his musical production of “A Midsummer Night’s Dream” also had their influence. “I think everyone who went into the sciences thanks Fr. Falbo for the role he played,” he says. “And while there are very formative moments that happen in classrooms, so much of what happens to you is what happened between the classes. That’s how you learn to stretch beyond what you’re capable of and put yourself in situations that are very enriching. The most memorable moments are the ones that pushed me into new directions or that played a big part of esprit de corp of being in high school.”

Gallagher went on to double major in physics and philosophy at Benedictine College in Atchison, Kan., and earn a PhD in physics from the University of Pittsburgh. He took a job as a research scientist with the National Institute for Standards and Technology (NIST), an agency under the U.S. Department of Commerce. Over 22 years of public service, Gallagher rose through the ranks to be nominated by the President Obama and confirmed by the U.S. Senate in 2009 to serve as the director of NIST. In 2013, he took on the additional role of Acting Deputy Secretary of Commerce, serving as chief operating officer for the department. He served in both capacities until June 2014, when he left for Pitt.

“Over the years I’ve found that service is the one things that has guided me through most of my adult life,” Gallagher says. “You want to be part of something bigger than you and contribute to make the world a better place.”

His leadership within the Commerce Department came during the most significant economic downturn in the United State since the Great Depression. “There was real risk and the calling was great,” he says. “I got a glimpse of government that people are often too cynical to see. They were some of the most dedicated people I’ve ever worked with.”

Gallagher says while there are obvious differences between Pitt and the Commerce Department -- “Football is a pretty big difference,” he says -- there are surprising similarities. The two large and complex organizations both have important science-driven components and need leaders to align goals across the institutions, keep key people in positions and see the forest for the trees.

Despite the miles, Gallagher still visits family in Albuquerque. “One thing I’ve realized is that a lot of things change, but a love of New Mexico scenery and green chile stays with you.”

He’s further reminded of his high school days when he attends Pitt basketball games, where the riotous student section is known as the Oakland Zoo: “I’m reminded of myself in a much smaller gymnasium cheering against Bernalillo.”