St. Pius X High School is rich with tradition, rooted in centuries of faith and over 50 years of school history. The symbols of the school remind students and the community that St. Pius stands for high ideals, not only in academics but in character-building.
The Sartan Creed
The Sartan Creed reminds St. Pius X students that they are called to higher expectations by following the scripture:
"To those who have been given much, much is expected."

A Sartan’s behavior in all aspects of life is founded on Catholic values.
Reverence
Reverence is the feeling of profound respect and awe, which all students should direct toward God. In a Catholic school this should be foremost in the mind and attitude of the student.

Students should show reverence during prayer and at all religious functions. They should avoid any actions which would distract others, and they are expected to participate actively.
School Motto
Teach Me Goodness, Discipline and Knowledge.
School Colors
Gold, Black, and White
School Symbol

The gold Pius “X” is the symbol of the school, representing eXcellence in academics and extra-curricular activities and a striving to live up to the standards of the gospel of Jesus Christ.
Crest
The crest was designed by Father Dennis Andrews, C.S.B. and Miss Kathleen Campbell. The artistic reproduction was done by Mr. Lynn James of Campus Specialties, Ltd. of Albuquerque, New Mexico. Approval for the adoption of this crest as the official crest of Saint Pius X High School was given by Archbishop Robert F. Sanchez of the Archdiocese of Santa Fe and the Saint Pius X High School Board in October of 1979. 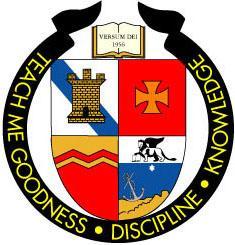