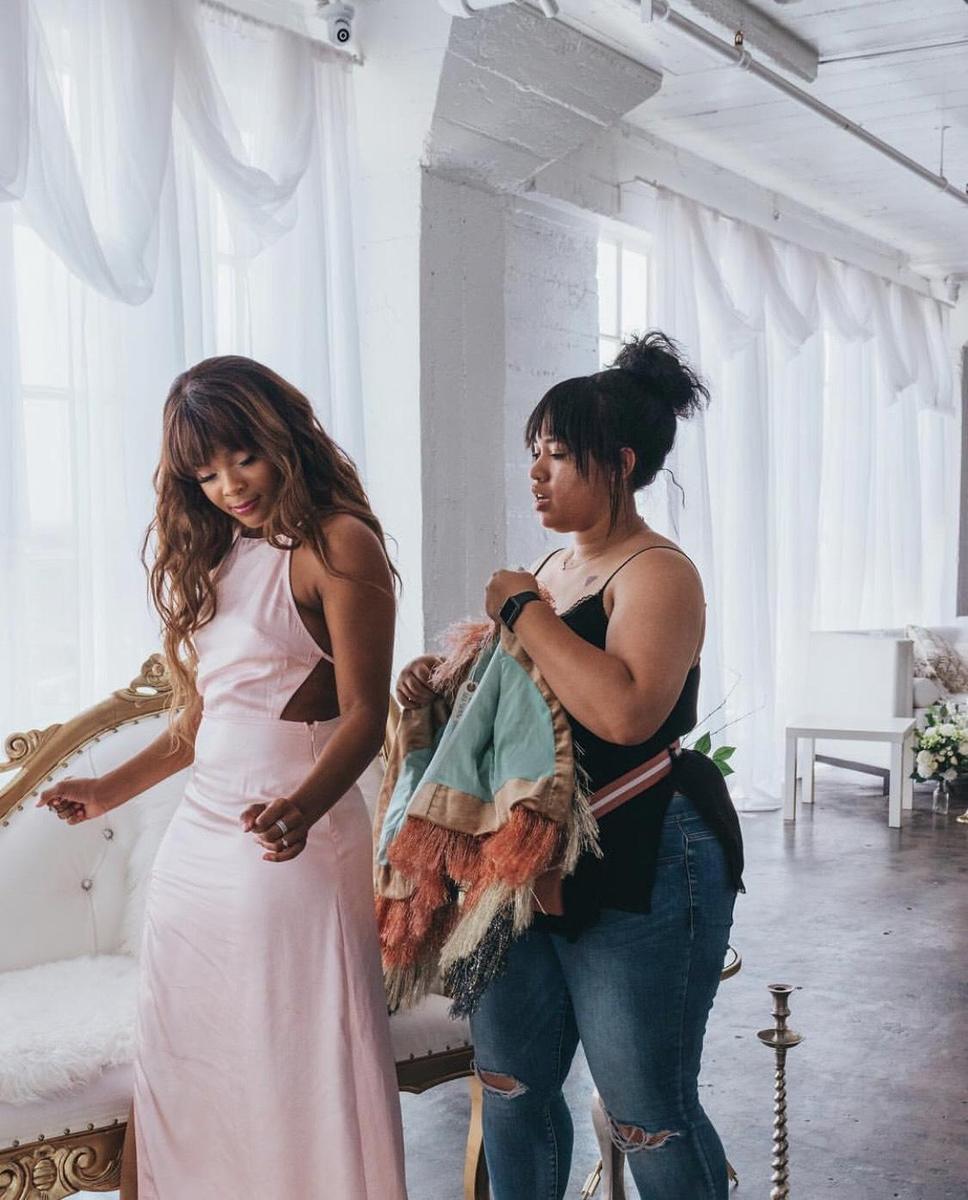 In 2015, Marissa Motley ’09 got in her car and drove to Los Angeles with one goal in mind: fashion. Four years later she’s styling celebrities for red carpet events, models for magazine shoots, and musicians for album covers.

“Styling is the first thing I excelled at easily,” Motley says from her car in L.A. traffic. “I started assisting and it just came to me.”

Not that breaking into the business and the frantic daily pace of her freelance wardrobe styling business are easy. She left the University of New Mexico in 2015 with a degree in political science and Africana studies, a minor in business management, and a lifetime of personal fashion research.

Once she discovered styling through television shows like the Rachel Zoe Project, she knew where she fit in.

She gave herself six months to figure out how to break into fashion styling. Lucky to have an aunt in L.A. with whom to live, Motley got a job in retail to pay the bills and an internship with L.A. Fashion Week, and started looking for stylists who needed assistants. She took courses in styling from the School of Style and learned the logistics of styling and breaking into the business.

“It wasn’t easy; the work was often unpaid, sometimes I’d get reimbursed for gas,” she says. “But I was training my eye to make this mine.

She was gaining experience and opening doors into the industry. About two years in, she juggled assisting, interning and working retail. That became too much to handle, but also made her realize she was ready to move full-time into styling. The day after she quit her retail job, she landed a full-time assistant position with Zadrian Smith, a celebrity stylist based in London. And after assisting with his L.A. clients for a year, Motley was ready to try it on her own. She opened her business a year ago.

She adds clients through connections made as an assistant and as a stylist and through Instagram. A typical assignment might include styling client Ashleigh Murray, who plays Josie McCoy on the television series Riverdale, for a red carpet event. Motley gets ideas from Murray on the type of look she wants to wear. Then Motley approaches fashion showrooms in L.A., New York and even Europe, describing the client, the event and why they would want to lend their designs for the celebrity to wear. If the designer finds it to be a good collaboration, they send their items or Motley picks them up.

“There is a lot of work that goes into building relationships with designers and showrooms that allow you to curate just the right look for each client,” she says.

Everything from dresses, pants, tops, shoes and jewelry -- usually 25 to 50 different looks -- will be on display at a fitting for Murray to choose from. Motley has a tailor on sight to adjust the winning look to perfection. On the night of the event, Motley helps dress the celebrity and works with the hair and makeup artists to achieve a cohesive look.

After the fitting, Motley takes everything not selected back to the showrooms. “It’s a lot of physical work,” she says. “Dresses are heavy!”

Styling has taken Motley and her looks to New York Fashion Week, magazine editorial and e-commerce shoots, Coachella, The Voice, The Emmy’s and music videos.

“In L.A. there’s an event every weekend, a movie premier, a festival,” she says. And she’s styling for them all.

As for her own style? “I really look for pieces that are minimal and well-constructed in tailoring,” she says. But she often has to be practical about her clothing choices as a day will have her down on the floor making sure a hem is just right or hauling heavy dresses around town. “As much as I hated wearing a uniform at Pius, I wish I had one today,” she laughs. “I miss the ease of just putting on the same thing every day.”

Her advice for those kids putting on the same thing everyday, but wanting to work in fashion: “Luck is when opportunity meet preparedness. Don’t be afraid to fail, because you will, but it’s not permanent. Clearly define what you want to do, make a plan, be flexible, work harder than anyone in your profession, keep your word and if possible find a mentor. Celebrate what makes you unique.”