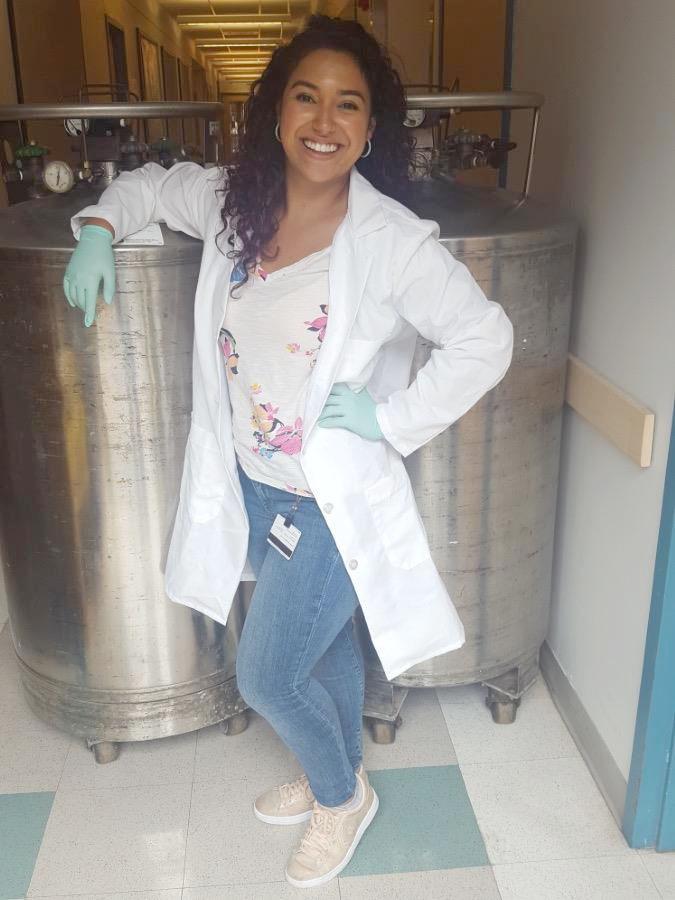 A hunger for science and a passion for sharing it with others carry Olivia Chavez ’11 forward as she works towards a PhD in biophysics at Boston University School of Medicine.

Studying the movement and interaction of proteins that carry fat particles in the blood and how that impacts heart disease and obesity particularly in people with diabetes, Chavez combines her interests in research and in improving the lives of people. She also studies the structure of a new vaccine for chlamydia.

Chavez earned bachelor’s and master’s degrees in biology at New Mexico Tech. While earning her master’s, she worked in Laguna Pueblo looking at soil contaminated by uranium mines. The effort combined work in biology and geology, and concern with how they impacted the people on the pueblo.

“From then I knew I wanted interdisciplinary work, not just straight biology,” she says. “I knew I wanted to do research and to help people, so it made sense to follow medicine.”

Biophysics is a good career field with many research options, but Chavez, whose electives at St. Pius X High School were always filled with multiple science classes, has interests that run the gamut from entomology to astrobiology.

Chavez became fascinated with science at a young age. “I think I was always doing science, even though I didn’t realize what it was,” she says. “We’d go camping and I was always sketching plants or I’d try to see how many different kinds of beetles I could find.”

To facilitate her interest, Chavez’s parents enrolled her in science camps every summer -- zoo camp, bosque camp, lung camp. “At lung camp we saw the direct effect of cigarette smoking on the lungs, did experiments, and swabbed the hospital for bacteria,” Chavez remembers. “I thought, ‘That’s so gross, but wow!’ I got my first microscope at that camp and a dissection kit I used through college.”

The interest continued into high school and solidified. Although she signed up to hear the makeup artist’s presentation at the SPX Career Day, it was full and she got shifted to the microbiologist who had just discovered a new archaebacteria in Africa.

“I came home saying I want to discover something,” she says. “When I got to New Mexico Tech, I told my dad about my first microbiology course, and he figured out the professor was the microbiologist who had inspired me at Career Day.”

A few years later, that microbiologist, Dr. Thomas Kieft, offered her a position in his lab and she eventually earned her master’s with him researching the soils in Laguna. “He was my inspiration!” she says. “He’s my scientific mentor and I met him at SPX Career Day.”

Chavez credits St. Pius X science teachers Robert Lah, Joan Leyba, Deborah Green and Jonathan Ball for recognizing her love of science, opening doors for her and pushing her to excel. “My science teachers had an awareness; they saw that I was able and willing to soak it all in,” Chavez says.

Chavez started her PhD program in Fall 2016 and hopes to complete it by 2022. “It depends on many factors -- the success of experiments, your work being included in a high-impact publication, funding -- all of those can launch you forward or hold you back,” she says.

She envisions working in clinical or industrial research in biophysics, but also sees a future in  sharing her knowledge and giving back.

“My big passion is sharing science with other people,” says Chavez, who started a science day volunteering program in which New Mexico Tech students talked at local schools about science. “We have inquisitive minds in New Mexico, but we’re not always given access and opportunity. I want to give back in that way.

“There is so much opportunity for science in New Mexico,” Chavez adds. “We have such unique geology, minerals and plants. New Mexico has so much to offer, why shouldn't it be studied and discovered by the people who know it most intimately? So while I want to make discoveries and publish papers, I also want to come back and share that. My parents pushed us to go into what we are passionate about; it would be cool if I could come back and be a part of that for someone else.”