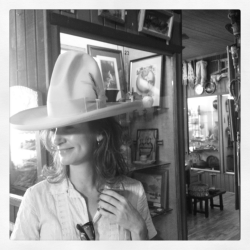 Lisa Dircks Carey ’86 calls herself a tumbleweed. Wandering from place to place -- New York to Napa Valley, Spain to Ecuador, Austin to Santa Fe -- she gathers up all she can from each experience. Today she’s settled in Lexington, Ken., directing all she has accumulated into the beautiful and whimsical hats she creates as milliner LD Cary.

“All that experience has added up to what I have to work with creatively,” Carey said from her design space as she put the finishing touches on hats destined to complete Kentucky Derby couture. “These beautiful works of whimsy satisfy my fascination with bits of nature and fabric. As I’m making these hats, my wandering to and fro informs my design -- a touch of color here or a line of something there or a beautiful woman in Spain whose image stays in my mind.”

Officially in her fifth year designing and creating custom and couture ladies dress and casual hats in straw and felt with accents of ribbon, stone, feathers and flora, Carey loves the details and the whimsy of her hats and fascinators. Sold online at LDCary.com and from Carl Meyers, a boutique in Lexington, the hats range in price between about $300 and $600.

“I had a practical upbringing so I have a hard time saying I am an artist, I don’t see myself deserving that title,” she said. “But I’m happy creating something tangible that brings beauty to the world in a small way.”

Carey began her journey into millinery making what she calls fanciful, 19th-Century-inspired headdresses for her girlfriends in Lexington, where she worked in administration at Three Chimneys, a world-class thoroughbred farm. Faced with a move that would split her time between New York and Florida, Carey wondered what kind of job could accommodate dual locations. A friend who know of her design skills pointed her to a hat and handbag designer working in New York and Palm Beach. She took an internship that required that she take classes at the Fashion Institute of Technology in New York City. She took the classes and the internship, which later turned into a job with the designer. After about two years,she decided to launch her own hat design business and began making hats featured on the high-fashion e-commerce website Moda Operandi, which allows customers to shop directly from designers. After a year with a master hat maker in Santa Fe, Carey took her hat design enterprise two years ago back to Lexington, where beautiful hats go hand-in-hand with horse racing, garden weddings, dressing up for church and sunny skies.

Carey has always appreciated costume and period pieces, and as a student at SPX, she looked for the next crazy new wave get-up to wear to school. “I always had a creative side, but I was not raised to pursue that,” she says.She lists Mr. Martinez with his right brain-left brain exercises, Mr. Padilla and Ms. French as influential, all English teachers who introduced her to different worlds and cultures through literature.

She left St. Pius X for Trinity University in San Antonio planning to pursue law school. After college she moved to Lexington and worked as a paralegal, earned a master’s degree in education, and then went to work in the film industry as production accountant on films including “Traffic” and “Courage Under Fire.” Her film work eventually led to a job with Francis Ford Coppola working on a script in New York for a year and then on his Napa Valley estate for a year.

“That time was instrumental,” Carey said. “He taught me if you can imagine it you can make it reality.”

As the hat designs and the business she imagines have become reality, she’s pleased to make people feel good, feel inspired and know that they look lovely.

“Throughout civilization we’ve always put something on our heads -- a wrapping, an elongation, a cap of some sort, a crown,” Carey said. “A headdress makes you feel different -- better, stronger, more confident, more beautiful.”