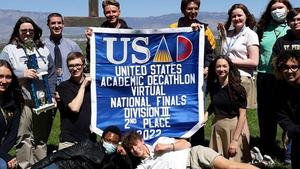 Last year the Saint Pius X Academic Decathlon team placed third at the National Finals, the first time in almost two decades that Pius was back in the Top Three in the country in the small schools division. Four of the nine team members that year graduated in 2021, but a strong core of juniors and sophomores returned for 2021-2022. The only question was whether the team could find a few more students to fill in the missing pieces and follow up with a second consecutive strong performance at the national level.

Fortunately, this is exactly what happened! The veteran team members combined with several new faces to win the New Mexico State Championship, Saint Pius X’s 21st state title. The Sartans then went on to take a convincing second place in division III at the 2022 national finals!

The United States Academic Decathlon was founded with a purpose of developing well-rounded individuals with strong leadership qualities. The competition prepares students in 10 subject areas including art, music, literature, history, economics, math, science, essay writing, speech, and personal interview. Teams may be composed of up to nine total students, three each from high, medium, and lower GPA categories. This year’s topic of focus was water. Art and music featured water-themed works or works associated with water from the Middle Ages to the present day. The literature category consisted of Jack London’s novel “The Sea Wolf” and several short works centering on tragic and personal themes involving water. The history section covered how civilizations have been shaped by the need for and use of water, as well as the current issues of water management and water pollution in the modern era. The science category covered oceans, their geology, geography, sea organisms, and marine ecosystems. The mathematics test involved problems from algebra, probability and counting techniques, and statistics. Finally, the economics category covered all major topics of macro- and micro-economics, and a special section relating to water as a resource. About half of the 2021-2022 SPX team was composed of five veteran members who had competed for Pius at nationals in Academic Decathlon in previous years. In addition, one member had nationals experience as an individual competitor, and three other team members were rookies this year. Veteran members included seniors Susanna Lanucara, Sela Boswell, Raphael Lente, and Ella Hooks, as well as juniors Adam Goodyear and Colette Correa-Bruzzese. Sophomores Chidike Anozie and Jonathan Constable and junior Jeffrey Peterson, first-time decathletes, also joined the team this year.

The National Board of Directors of USAD had to decide whether to hold in-person state and national championship competitions by December 2021 because convention centers and hotel rooms would have to be reserved far in advance, and teams across the country needed to know what to prepare for. Unfortunately, the timing of this decision coincided with the arrival of omicron-COVID in the United States, and no one at the time could adequately predict the consequences or length of time omicron-COVID would linger. Therefore, the board opted for the safer of the two alternatives, and the in-person national competition was forgone in favor of running all the major competitions online in the spring of 2022 in order to prevent potential problems related to travel, quarantining, physical proximity of students and judges, and so on. "Watson and the Shark" by John Singleton Copley, 1778.

At the end of February 2022, the Saint Pius X team competed and won its 21st state championship, earning the right to represent New Mexico at the national finals! Pius competed in division III, high schools with approximately 1000 students or fewer.

Two months later, during the week of April 18th, the team competed online over three days, with interviews, speeches, and objective tests all done virtually. On April 23rd, USAD held its second-ever virtual Awards Ceremony via YouTube, with students, coaches, and parents watching from around the country, and the results brought great news for the Saint Pius X team!

Not only did SPX students win nineteen national medals in individual events (one of the highest totals ever), but when the overall top teams were announced, Saint Pius X won second place in the country in division III! Our school teams have achieved several fourth and fifth place finishes at nationals over the past two decades, but this was the fourth time in school history that our team earned a place in the top three! Sartans' re-creation of "Watson and the Shark."

A list of the higher individual achievements at the nationals follows.

The first time that USAD decided on using a divisional system, where large, medium, and small schools were separated into separate categories for head-to-head competition, was 1999. Saint Pius X earned the national championship of division III that year in Anaheim, California. At the 2001 National Finals in Anchorage, Alaska, Saint Pius X was moved up to division II when numerous additional small schools were allowed to compete at the national finals that year, and the team captured third place overall with a strong performance. Last year was the first-ever online national competition due to COVID-19, and the Sartans placed third in division III.

The team would like to thank Mrs. Barbara Ducaj for serving as the team’s official proctor for the online competitions and Mr. Orlando Rodriguez, who served as back-up proctor, allowing the team to participate in this year’s virtual nationals. It would also like to thank SPX teachers Jonathan Ball, Elisa Machtinger, Susie Sanchez, Diana Perea, Dan Cappleman, and Daniel Gatsch for assistance in preparation for the personal interview portion of the competition. This is the 30th year that Saint Pius X has competed in the United States Academic Decathlon. James Penn, mathematics and science teacher at SPX, started the program in the 1991-1992 school year. There were numerous highly competitive teams in New Mexico in the 1990’s and early 2000’s, making state championship wins quite difficult. Though, Saint Pius X kept moving up the ladder and eventually won its first state title in 1998. Since then, Saint Pius X has collected 21 state championships and has often placed among the top six teams in division II or division III at nationals, including four top three team trophies and banners at the national finals. Mr. Penn was very happy to have a mix of returning veteran decathletes and students new to the program who decided to work hard and become an important part of the team. We have had a group of four dedicated students who have been part of the program for the last three years, learning and achieving wonderful results, and the newer members demonstrated great skill and determination at the same time. Everything gelled for us, and the students pulled off a fantastic result this year!

Congratulations to every team member! Thank you for making this school year a successful and memorable one!