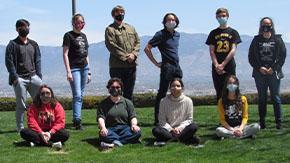 At the end of February 2021, the Saint Pius X Team competed and won its 20th State Championship, earning the right to represent New Mexico at the National Finals.

As the COVID-19 pandemic continued for many months, it was looking as though the number “20” was not going to be remembered fondly by many.  2020 saw the outbreak of the virus.  The spring semester of the 2019-2020 school year was interrupted and pushed into an unexpected remote learning situation, and in-person large events such as Prom and Graduation could not take place as usual.  And then the 2020-2021 school year began socially distanced as well, the entire fall semester took place with continued remote learning.  The year 2020 seems to be destined to be deemed a “forgettable” year.

Although it was not foremost in the minds of the Saint Pius X Academic Decathlon students at any point in the school year, their dedication and work over this entire school year ended up becoming a way to put a positive spin on the number “20.” The United States Academic Decathlon was founded with a purpose of developing well-rounded individuals with strong leadership qualities.  The competition prepares students in 10 subject areas including art, music, literature, history, economics, math, science, essay writing, speech, and personal interview.  Teams may be composed of up to nine total students, three each from high, medium, and lower GPA categories.  This year’s topic of focus was the Cold War.  Art and Music featured abstract, political, and performance art of the era;  the Literature category consisted of the novel Cat’s Cradle by Kurt Vonnegut and several short works centering on science fiction and famous Cold War speeches;  the History section encompassed major events that shaped the turbulent era that saw the build-up of nuclear weapons, social changes in the United States, and skirmishes around the world involving American and communist forces;  the Science category covered the foundations of astronomy, the life cycle of stars, the planets of our solar system, and the expansion of the universe;  the Mathematics test involved problems from algebra, geometry, and calculus;  and the Economics category covered all major topics of macro- and micro-economics and a special section relating to the Cold War.

The National Board of Directors of USAD had to make a decision about State and National Championship competitions by December 2020 in order for teams across the country to adequately prepare for their events.  It was decided to forgo in-person mass gatherings of students and run all the major competitions online in order to prevent potential problems related to travel, quarantining, physical proximity of students and judges, and so on.

At the end of February 2021, the Saint Pius X Team competed and won its 20th State Championship, earning the right to represent New Mexico at the National Finals!  Saint Pius X was placed in Division III, high schools with approximately 1000 students or fewer.

Two months later, during the last week of April, the team competed online over three days, with interviews, speeches, and objective tests all done virtually.  On May 1st, USAD held its first-ever virtual Awards Ceremony via YouTube, with students, coaches, and parents watching from around the country.  And the results greatly lifted the spirits of the Saint Pius X Team members!

Not only did Saint Pius students win fourteen National Medals in individual events (one of the highest totals ever), but when the overall top teams were announced, Saint Pius X had won Third Place in the country in Division III!  Our teams had achieved several Fourth and Fifth Place finishes at Nationals over the the past two decades, but this was the first time Saint Pius X placed in the Top Three … in exactly 20 years.

A list of the higher individual achievements at the State Championship follows.

HONORS  DIVISION
Susanna Lanucara
Sela Boswell
Adam Goodyear
SCHOLASTIC  DIVISION
Raphael Lente
Danny Pham
Monica Penn
VARSITY  DIVISION
Ulban Aragon
Ella Hooks
Trinity Aragon
Yes, the number 20 became a magic one for the Saint Pius X Academic Team this year, the 20th State Championship, and a National Banner for placing in the Top Three at Nationals, exactly 20 years since the last SPX team achieved that distinction at the National Finals in Anchorage, Alaska, in 2001.
The team would like to thank Mrs. Barbara Ducaj for serving as the team’s official proctor for the online competitions, allowing the team to participate in this year’s virtual Nationals.  It would also like to thank SPX teachers Jonathan Ball, Ryan Neuschwanger, Jennifer Hillsey, Susie Sanchez, and Diana Perea for assistance in preparation for the Personal Interview portion of the competition.
This is the 30th year that Saint Pius X has competed in the United States Academic Decathlon.  James Penn, mathematics teacher at SPX, started the program in the 1991-1992 school year.  There were numerous highly competitive teams in New Mexico for several years, but Saint Pius X kept moving up the ladder and eventually won its first State Championship in 1998.  Since that time, Saint Pius X has often placed among the top six teams in Division II or Division III at the National Finals and has collected twenty State Championships.
Congratulations to every team member!  Thank you for making the COVID-19 school year a memorable one in a good way!