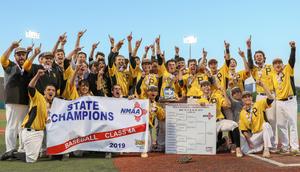 Sartans captured the Class 4A state baseball championship and are proud to call Gatorade's Player of the Year one of their own. “The award, which recognizes not only outstanding athletic excellence, but also high standards of academic achievement and exemplary character demonstrated on and off the field, distinguishes Walker as New Mexico’s best high school baseball player.” Full NMAA article and videos available here.