The results are in for the National French Contest 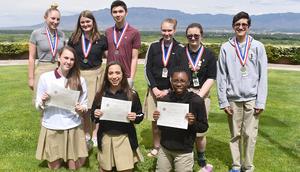 Sartans are State Champions and earn national gold and silver medals for their outstanding national rankings:

For the past 10 years, St. Pius has had one or more State Champions in French every single year as well as students who have ranked in the top 10 nationally. Allez Sainte Pie!