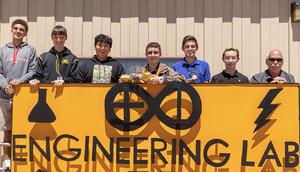 In a field of university and college robotics teams, Pius engineering students return home winners of the robotics challenge.
Five years ago, St. Pius X Engineering and Math teacher Larry Sanchez received an invitation from alumna Mary Carpenter ‘13 to attend the Colorado Robotics Challenge and see her team from Trinidad College compete. “OK, sure, I’ll get up at 3 o’clock on a Saturday morning, drive 4 hours up there, and go watch an old student of mine compete in this thing. Well, it was the best decision I ever made,” said Sanchez.
The Trinidad College team won that year, making Carpenter Sanchez’ first student to win the robotics challenge, but she would not be his last. After repeated requests to the organizers of the competition, Adams State University and NASA's Colorado Space Grant Consortium, Sanchez was permitted to enter for the first time last year, as the sole high school in a field of Colorado universities and colleges. Pius’ first robot entry in spring 2018 could only perform what is known colloquially as dumb motion. Its lack of onboard sensors for guidance led to it being aptly named Scarecrow. Even without digital brains it still reached its target and finished in the middle of the pack.
There are only three requirements for teams invited to the challenge, but they become exponentially more difficult. The first is that robots must have motion, unguided by an operator or onboard sensors, and attempt to reach their target. The second is that robots use an onboard digital compass to autonomously reach their target. The first two requirements, if done well, are typically enough to win. The third requirement is for a robot to autonomously detect and guide its way to a beacon’s radio frequency. The third is the most challenging and can be accomplished instead of the second.

This year, the Pius engineers were determined to double their efforts and prepared to return to Colorado with two robots. Both robots were designed for the 1.5 kg division, instead of the heavier 4 kg division. The lighter division is more popular, and meant they would compete against over 20 other robots. The confidently named Team Won, along with Team Rookies, each consisted of three groups, mechanical, coding, and documentation. The students decided which groups they would contribute to based on their strengths.
The entire process from initial SolidWorks sketch to final code update took 4 months. The mechanical teams designed and revised for 10 weeks to complete their builds. The coding teams wrote in C for 12 weeks to complete their programming. Finally, the documentation team organized and submitted progress video, notes, and code to the competition organizers throughout the process. From start to finish, they worked collaboratively, and were challenged by Sanchez and the campus grounds knowing full well their final design would have to traverse the Great Sand Dunes National Park. The months of dedication paid off.
Though Team Rookies were taken out of the running by an electrical surge, Team Won’s robot nearly completed all six, progressively difficult courses. While on its way to completing the final course, a melting stream caused an abrupt end to the robotics challenge. Though, judges clearly noted the robot’s progress, because they would go on to announce Team Won as the winner of the 1.5 kg division. The team was led by Sean Goodyear, sophomore coding lead, Michael Freisinger, senior mechanical lead, and Adam Contreras, sophomore documentation lead.
“I like this the competition because one, we’re going against colleges and universities, these are the smart guys, they’re taking it seriously, their degrees are in this field, they want to make this happen. Two, it’s not a sterile environment. It’s a vicious environment. You got heat, wind, cold, water, mud, concrete terrain, talcum powder terrain. It is unbelievable, you don’t know what you are going to run into. That’s why I want to be in this competition. It pushes these kids to their limits. That’s what engineering is all about, accomplishing the impossible. That’s what these kids did and we won,” said Sanchez.