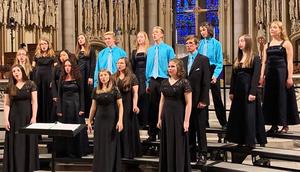 The Pius Band, Choir, and Orchestra traveled to New York City to compete in the Heritage Music Festival and each ensemble won first place in their division.

You only travel 2,000 miles to compete in front of nationally recognized clinicians, judges, and adjudicators for one reason, to win first place, and the St. Pius X Music department did just that, three times. On March 21, the Pius Band, Choir, and Orchestra traveled to New York City to compete in the New York Heritage Music Festival. The competition took place in the historic Riverside Church located in Manhattan, near Columbia University. The same walls that echoed a sermon delivered by the Rev. Dr. Martin Luther King, Jr. and a speech from Nelson Mandela, played host to the Sartans.

Schools from across the country were scored and separated into divisions and ranked against each other. The Pius Choir competed in the gold division, band and orchestra in silver. When the scores were tallied, each ensemble was awarded first place in their division. By winning first in the gold division, the choir earned an invitation to perform at Carnegie Hall next year.

Special recognition was paid to Leo Kim, freshman clarinetist, for outstanding instrumentalist. Additionally, Amanda Stone, senior, was recognized by Deen Entsminger, Professor of Music at Belmont University School of Music, for her work conducting a performance of the choir. Entsminger said Stone has a bright future as either a conductor or musician.

Riverside Church was more like a Gothic style cathedral. Competing there was insane, the acoustics were amazing. Riverside reminded me of St. Patrick’s Cathedral. It has a similar grandiose environment with vaulted ceilings and stained-glass windows. Performing there was almost surreal.
- Amanda Stone

In addition to the festival, there was an educational component to the trip. “We took them on a tour of the Lincoln Center, and they got to sing in Geffen Hall. They learned about the opera program, and the national symphonic orchestra program, and we got to see all the rehearsal spaces, and how they put everything together,” said Clarissa Clark, Chorus Director. We like to do a spring trip every year, but it has to have a good education component and it really needs to have a spiritual component to it, like when we went to St. Patrick’s Cathedral to have Mass in such an amazing facility,” said Clark.